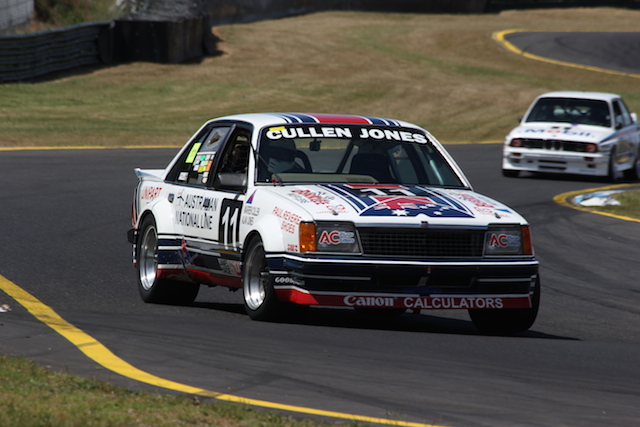 Jeff Trembath currently campaigns the car in the HTC

A reigning Formula 1 World Champion couldn’t find success at Bathurst with this VC Commodore Group C racer on the Mountain back in 1981, but Victorian Jeff Trembath did this year.

In the latest Heritage Touring Cars profile we’re looking at a car that was part of an historic moment in the history of ‘The Great Race’. When Victorian privateer racer Warren Cullen pulled the ‘Advance Australia’ Commodore into pit-lane and handed over to none other than 1980 Formula 1 World Champion Alan Jones, it was the first time a reigning World Champion had competed in the race.

Despite not winning the 1981 crown, the F1 season was not over when Bathurst was held so Jones was still the reigning World Champion.

He had come to Bathurst in a blaze of publicity, the Williams F1 driver making his Bathurst debut having only ever visited the Mountain before as a boy to watch his father Stan Jones race a Maserati 250F in the 1958 Australian Grand Prix.

Channel 7 commentator Evan Green proclaimed it as “a great moment in the history of The Great Race” as the Cullen crew completed the stop and sent Jones out onto the track to battle the local heroes for Bathurst glory.

But the expectation didn’t match the end result and his Bathurst debut lasted just 6.2-kilometres. 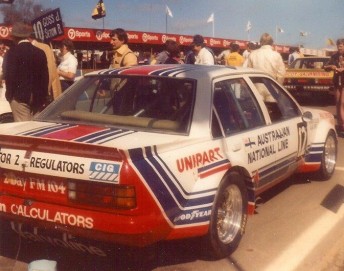 One single lap was all Jones was able to complete before the car cried enough, overheating and losing oil pressure.

It was an ambitious plan from the start. The Cullen car suffered from a distinct lack of preparation, manifesting itself in an engine replacement because of a broken piston in first practice, and a broken half shaft in second practice.

However the team was able to overcome these pre-race issues, allowing Cullen to circulate as high as sixth in the early laps of the race (after starting 20th) before Jones took over. Or at least attempted to.

Cullen later sold the car after its Bathurst exit and it continued to race in Aussie touring car racing, making two further appearances at the Mountain.

In 1983 it was the ‘Roger Manson Holden’ car for brothers Andrew and Roger Manson resulting in a DNF and again in 1984 as the yellow ‘Bayswater Automotor Wreckers’ car for Colin Campbell and John Faulkner.

In ‘84 it was the last car to sneak through the closing gap between Tom Walkinshaw’s Jaguar and the fence in the start-line pile up to finish an eventual 25th in the last Group C Bathurst 1000. A lack of preparation curtailed the car in the race

Over the next 20 years the car ran as a Sports Sedan with a 600 horsepower engine under the ownership of Mike West in addition to appearances in the emerging Group C Historic category.

And that’s where the story of current owner Jeff Trembath and the car begins.

“I got my first car when I was 12 years old and did my first engine transplant at 14 and basically fell in love with cars and racing,” he says, though family and business commitments meant he didn’t follow a racing path – until recently.

“I woke up probably three years ago and thought that if I don’t go and do this I’m never going to do it.

“So I went out and began looking for a Torana, but instead came across Mike West selling the ex-Cullen Commodore. It came with all the right pedigree, history and logbook so I purchased the car.”

Trembath’s first event was the supports for the Sandown 500 a few years back.

“At the end of the race, people kept coming up and congratulating me and I said ‘what’s that for?’, and they said it was nice to see the car going at the end of a race meeting.” 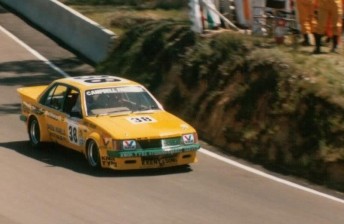 Since then he hasn’t looked back, racking up a strings of events up and down the east coast.

“The big one was qualifying first in class at the Grand Prix, winning the first race, blowing up the diff on the warm up lap of the second race, and in the third race going from rear of the grid back up to second.

“One of my goals has always been to drive a race car at race speed at Bathurst, and to do that this year and win my class and get the trophy has been an absolute achievement for me.

“It was great to take a car like that back there and do it. All of those cars from that era, that’s where your heart lives. That’s what really attracted me to Heritage Touring Cars.”

The Heritage Touring Cars will next be in action at Lakeside in Queensland at the Lakeside Classic on July 25-26.