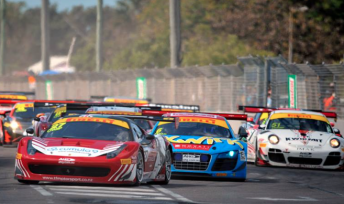 The Australian GT Championship’s new driver seeding system will be deployed for the remainder of the season following a successful debut at Townsville.

Tony Quinn’s championship has increased the number of seeding grades from four to 12 to define the varied levels of driving talent more accurately.

The seedings, allocated at the discretion of AGTC management, determine the length of the compulsory pitstop time in races.

“We have the added benefit that the Europeans have taken care of the car parity and we amongst ourselves unilaterally decide who and where people fit in the jigsaw puzzle and it seems to have worked,” Quinn told Speedcafe.com.

“I think the evidence is that we had 10 cars on the lead lap and there was a variety of drivers there and the thing that really pleases me is that everybody is happy.”

Although pleased with its debut, Quinn said the championship will evaluate the seeding system early next season to ascertain if any improvements or tweaks are required.

“The one thing about Australian GT currently and since I’ve had it, we are fairly consistent,” Quinn added.

“I think it would be absolute chaos if we tried to manipulate it at every round.

“At this stage our strategy is to have it at the beginning of the year have a review at Phillip Island and then leave it for the year.”

The Australian GT Championship heads to Sydney Motorsport Park for the fourth round from August 21-23.