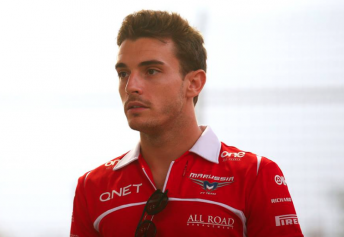 Jules Bianchi’s father says he is ‘less optimistic’ that his son will recover from serious head injuries suffered in an horrific crash at last year’s Japanese Grand Prix.

The former Marussia driver remains unconscious in a Nice, France, hospital following a collision with a recovery vehicle at Suzuka nine months ago.

After initially spending seven weeks in Japan’s Mie General Medical Center in Yokkaichi, the 25-year-old was moved to his native France to be closer to his family, who continue to be at his bedside.

Bianchi’s condition has shown little signs of improvement which has left his family pessimistic that he will make a recovery.

“We sometimes feel like we’re going crazy, because for me, it certainly is more terrible than if he had died.

“For we’re not able to help him more than we can.

“Time goes by and I am now less optimistic than I may have been two or three months after the crash, when we could hope for a better evolution.

“At some point, you need to be well-grounded and realise how serious the situation is.

“He said to us that if he ever had an accident like that of Michael Schumacher, that even if his only handicap was not being able to drive, he would have a lot of difficulty living. Because it was his life.”