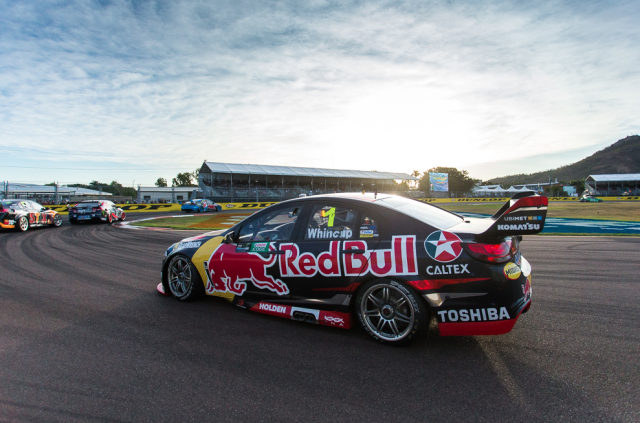 Jamie Whincup returned to the top five in Townsville

Jamie Whincup has declared that he’s far from given up on winning a seventh V8 Supercars Championship this year after an encouraging weekend in Townsville.

The 32-year-old scored his first top five finish in 10 races on Sunday, taking fifth position from Prodrive’s Chaz Mostert on the final lap.

The result came after a pre-event reshuffle that saw former race engineer David Cauchi stepped aside in favour of the man he had replaced in the role, current team manager Mark Dutton.

While a fifth and a ninth from the two races saw Whincup lose yet more ground to championship leader Mark Winterbottom, the Red Bull star said he took renewed confidence from the weekend.

“We’ve got a plan to move forward, it started at the weekend and I really feel like we achieved what we came here to achieve,” Whincup told Speedcafe.com.

“We improved the car and started to get a direction on where we’ve got to go.

“The best we could ask for was a top five, so to grab fifth on the last lap of the last race was a good feeling.

“I just enjoyed the racing. I haven’t really been racing in the last few rounds, I’ve been a bit of a sitting duck just holding on. It was great to be able to race.”

Whincup remains eighth in the standings after six of 14 events, now 391 points adrift of Winterbottom, who won both races in Townsville.

“We’re just worrying about our own job to improve our car and fingers crossed that at some stage this year we’ll be back up there,” he said of challenging the dominant Prodrive entries.

“You never give up (on the title). It’s a bloody long season and there’s still plenty of water to run under the bridge.

“Until after Gold Coast, then you know where you’re at for the run home.”

While Red Bull’s technical director Ludo Lacroix is scheduled to take over engineering duties on Whincup’s entry from Queensland Raceway, the driver says no decision has been locked in.

“It’s an engineering group so the changes aren’t as big as they look on the outside,” he said.

“When we get back to the shop we’ll get Ludo up to speed on what happened this weekend.

“We’ll keep chipping away, but nothing is set in stone.

“Ludo is pencilled in for Queensland Raceway, but it could certainly change.”

Dutton told Speedcafe.com earlier in the weekend that his role on Whincup’s car was strictly a ‘one show only’ affair before resuming his team manager duties at Ipswich.