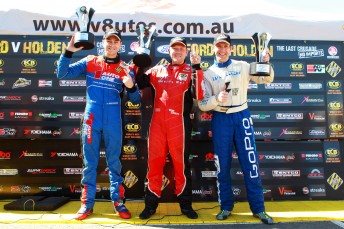 The Mango Credit Holden Ute driver proved to be the class of the field with the New South Welshman rarely threatened on his way to wins in the reverse grid Race 2 and the weekend’s final encounter.

Adam Marjoram and Nathan Pretty followed Sieders home on both occasions to complete the podium.

Saturday race winner Rhys McNally, who finished fourth in Race 2, did apply pressure on Sieders in the final race before he suffered a suspension failure, which put him out of the contest.

The incident triggered a Safety Car but it failed to halt Sieders’ charge to his second win of the weekend.

Sieders’ triumphs were his first behind the wheel of a Holden as he moved to within 20 points of championship leader Ryal Harris.

“I think the Holden is what I needed to get the monkey off my back here in Townsville, we’re so happy to finally get a podium and race win this year, said Sieders.

“We got great starts all weekend and I know it’s testament to the teams work on the car.

“It’s only the halfway point in the series now so I’m finally back where I should be in the championship, so bring on the rest of the year.”

It proved to be a difficult weekend for Ryal Harris as he saw his championship lead over Marjoram cut to 10 points after finishing ninth and 15th in the day’s two races.

Meanwhile, Queenslander Mason Barbera was hit with a $5,000 suspended fine and an exclusion from the meeting for his involvement in an incident, which saw him make contact with Jeremy Gray in Race 3.

The pair later disputed the incident in parc ferme before Barbera was summoned to a stewards hearing where his fate was decided.

The V8 Utes Racing Series heads into a mid-season break before returning at the Wilson Security Sandown 500 on September 11-13.