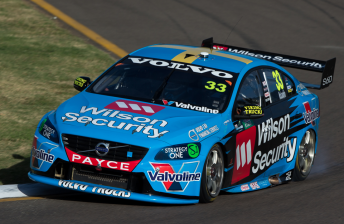 Scott McLaughlin took a surprise first Armor All Pole Award of the season in the Top 10 Shootout ahead of Race 17 at the Castrol Edge Townsville 400.

The Volvo driver was the seventh onto the circuit in the one-at-a-time session, stopping the clocks with 1:13.41s.

Mostert lost time with a wild slide across the exit of Turn 6, but still did enough to take the outside of the front-row.

Shane van Gisbergen gained three places from qualifying to end up third ahead of Reynolds and Winterbottom.

“It’s awesome,” beamed McLaughlin, who has endured a horror second year with Volvo after a 2014 season that netted 10 pole positions.

“The boys gave me a great car and we had a good strategy for that Shootout. The team has stuck by me and fixed all the issues I’ve been complaining about. I’m so happy.”