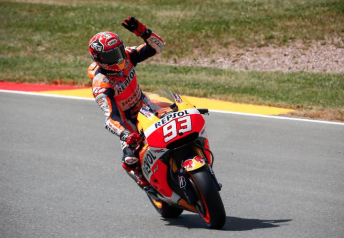 Marc Marquez scored his first MotoGP victory since April as he completed his domination of the German Grand Prix with a commanding ride at the Sachsenring.

The reigning world champion confirmed his resurgence with a dominant performance to head a Honda one-two, with Dani Pedrosa claiming only his second podium of the season.

Championship leader Valentino Rossi was forced to settle for third having been unable to match the blistering pace set by Marquez and Pedrosa.

The race developed into a fight between the factory Honda and Yamaha squads as Jorge Lorenzo briefly held the lead courtesy of a stunning opening lap move around the outside of the Honda duo at Turn 1.

However, Marquez applied intense pressure on Lorenzo before he found a way through to the lead on lap five.

Behind, Rossi scythed through the field to occupy second, aided by moves on Pedrosa and Lorenzo, but he couldn’t maintain Marquez’s pace.

Rossi subsequently dropped back to third behind the second Honda, where he stayed for the remainder of the race as Marquez took the spoils from Pedrosa.

Third place for the nine-time world champion saw the Italian extend his championship lead to 13 points over Lorenzo.

The sister Tech 3 Yamaha of Pol Espargaro finished eighth, while Danilo Petrucci and Suzuki’s Aleix Espargaro rounded out the top 10.

Australia’s Jack Miller was involved in a hotly contested scrap with Alvaro Bautista for much of the race, which resulted in a hard fought point for the LCR Honda rider in 15th position.

MotoGP will undertake a summer break before heading to Indianapolis for Round 10 on August 9.