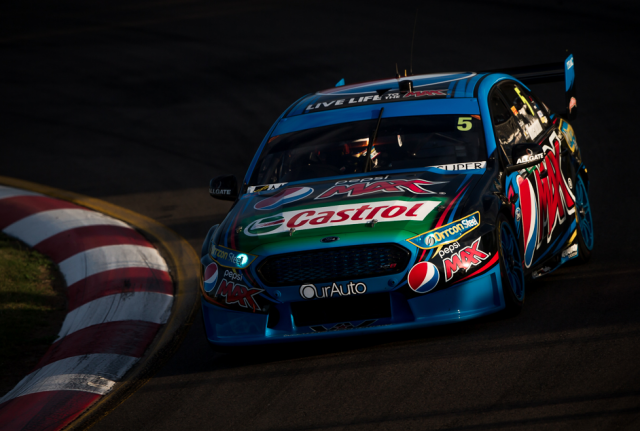 Mark Winterbottom surged to another victory

Starting from fifth after a lacklustre Shootout lap, an early first stop ultimately set up the win for Winterbottom as the bulk of the field again ran the conventional soft-hard-soft tyre strategy.

Making his first stop on lap 10 of 70, the #5 Ford continued to run fifth during the middle stint, before leaping into contention when the second stops unfolded just prior to halfway.

Winterbottom emerged on the tail of stablemate Reynolds and, with seven lap fresher tyres, applied consistent pressure to the race leader.

Reynolds eventually locked a tyre and ran wide at Turn 2 on lap 52, allowing Winterbottom to slip down the inside at the following corner.

“The car on hards wasn’t the best,” reflected Winterbottom afterward, “but the boys did a tweak in the pitstop and it was a rocket after that.”

Prodrive again appeared set for a one-two-three heading into the final 15 laps, before Chaz Mostert and then Reynolds were picked off by Courtney.

The 2010 champion was one of a handful to take advantage of a mid-race Safety Car to run a three-stop strategy, which ultimately helped his progression from 16th on the grid.

Courtney survived an intense dice with eventual fourth place finisher Garth Tander on his way through the field in the dying laps; the team-mates making minor contact during the fight.

Sixth place finisher Mostert had made his strategy play at the first stops, short-filling in an ultimately failed attempt to take the lead from Reynolds.

He eventually shook out from the second stops in third, but an early tyre lock-up hurt his progress to the chequered flag; allowing Courtney, Tander and eventually Jamie Whincup through.

Seventh through 10th at the flag were filled by Lee Holdsworth, Andre Heimgartner, Craig Lowndes and Todd Kelly.

The Safety Car had been called shortly after the first stops in order to retrieve debris from Scott McLaughlin’s Volvo, which spat a power steering belt on the way to retirement.

It was a miserable end for the pole-sitter, who had struggled to hold his own with the Prodrive entries in the early stages.

Fellow Kiwi Fabian Coulthard also struck trouble, finishing 13th after a penalty for an infringement at his first pitstop.