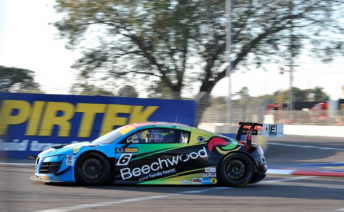 Nathan Antunes scored his third victory of the Australian GT Championship campaign after coming through an eventful Race 2 on the streets of Townsville.

The Skwirk Audi R8 driver claimed the lead after the mandatory pit stops which he held until the chequered flag despite a late Safety Car that threatened to put his win in doubt.

However, Antunes managed to hold his nerve to win from Maranello Motorsport’s Tony D’Alberto and Grant Denyer, with the McLaren 650s of Klark Quinn in third.

Maranello Motorsport had led the first half of the race courtesy of a strong drive from pole position by Denyer, with the Ferrari 458 GT3 rejoining an effective third after the pit stops.

Antunes held second spot in the opening half of the 46 lap encounter but he rejoined the race in the lead after a late stop.

The Audi driver was aided by a shorter compulsory 109 second pit stop time compared to the 123 second stop duration for the #88 Maranello Motorsport crew.

Once the pit stops were completed D’Alberto was faced with the challenge of closing down Antunes’ lead after quickly passing the second placed Ford GT of Kevin Weeks.

Weeks became a talking point in the race when he was turned around by Max Twigg’s Erebus Mercedes SLS, which left the Ford beached at the chicane, causing a Safety Car with 10 minutes remaining.

D’Alberto tried to fight his way passed lapped traffic to challenge Antunes in the closing laps, but he was unable to prevent the Audi driver from taking the chequered flag.

Tony Walls’ McLaren 650S came through to finish fourth ahead of an identical McLaren driven by championship owner Tony Quinn.

The Jamec-Pem Audi R8 of Steve McLaughlan enjoyed a solid drive to finish sixth with the Lamborghini Gallardo of John Magro in seventh.

The Greg Crick/Christopher Mies Jamec-Pem Audi R8 was eighth after an eventful race that saw Mies given a drive through penalty for contact with Tony Quinn in the opening laps.

James Koundouris rounded out the top 10 despite a spin at the final corner of the last lap which saw him throw away a fourth place finish.