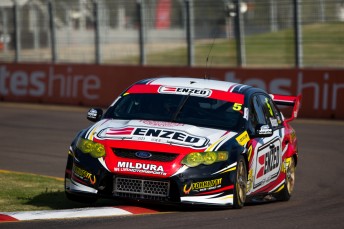 Cameron Waters remains the man to beat in the Dunlop Series as he secured pole position for the first of two races on the streets of Townsville.

Waters joined the session late but he wasted little time in getting up to speed as he knocked Le Brocq off the top of the times with a 1:14.6769s effort.

Team-mate and reigning Dunlop Series champion Paul Dumbrell was fourth just ahead of Chris Pither’s Ford Falcon which had set the initial pace in the session.

A late charge saw South Australian Todd Hazelwood completed the third row in sixth behind the wheel of the iSeek Falcon.

Ant Pedersen put his back injury behind him to claim seventh spot as James Golding, Shae Davies and Kiwi Simon Evans rounded out the top 10.

Andrew Jones has been forced to withdraw from competition this weekend after suffering from chest pains which saw him undergo tests at a local hospital yesterday.

The opening Dunlop Series race of the weekend is scheduled to start at 14:20.