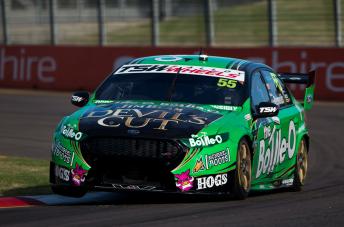 Reynolds broke through for only his second win and first since October 2013 in the Sunday race at Darwin last month.

After revealing he had commissioned a sports psychologist to work on his mental approach, Reynolds needs to maintain his peak form after being read the riot act by PRA.

“This is his fourth year with the team. He knows himself (that he must perform), it’s not just me putting the pressure on,” Edwards told Speedcafe.com

“(But) it’s by no means that we’ve shot him and he’s been put out to pasture.

“We’ve been competitive through the whole period that Dave has been with us.

“And there’s no doubt the cars are more competitive this year and last year.

“To be honest all is not lost with Dave but he needs to deliver.”

Edwards believes the main problem Reynolds faced was his lack of aggression on the racetrack.

It is an area which he has started to address by adjusting his off-track preparation and becoming meaner through a boxing training regimen.

“The best way to describe it is that he’s too much of a gentleman,” said Edwards.

“He actually has to have a bit of mongrel about him because the 24 blokes he is racing with have got that mongrel.

“He’s stopped riding his push bike up and down Beach Road and he’s taken up boxing.

“Dave is working hard and it was great to see him get that win in Darwin and he’s not been far away from his team-mates until that point.”