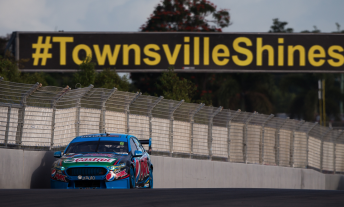 Pole-sitter Chaz Mostert says a mechanical issue is the most likely cause of his dramatic fall from podium contention in the closing stages of Race 16 in Townsville.

Mostert was in third place behind his Prodrive Racing Australia team-mates Mark Winterbottom and David Reynolds with 11 laps remaining, before falling back to eighth.

The #6 Ford’s struggles cost Prodrive a maiden podium sweep on an otherwise dominant day for the Melbourne-based squad.

“We have to sit down and work out what’s happened,” Mostert told Speedcafe.com.

“I’d like to say something may be broken in the car but at this stage we’re not too sure.

“I felt like I’d been driving consistently compared to the other two boys (Winterbottom and Reynolds) in our team.

“I tried to look after the tyres and I just got to a certain point in the race and the car changed.

“We’ll work out what’s going on tonight. It’s difficult to say what’s really happened but we’ll go through the data and work it out.

“It just burnt the tyres up,” he added. “There was about a five lap period where the car just didn’t quite feel the same.”

With the team having suffered bent rear lower control arms earlier in the weekend, PRA team principal Tim Edwards confirmed that the team would analyse Mostert’s dramatic fall through the order.

“Everyone’s tyres were going but Chaz just dropped off a mountain, so it could have been something else in the car,” Edwards told Speedcafe.com. “But until we get it on the patch and understand it we won’t know.”

Mostert has converted just two of his pole positions into race wins this season, having again lost out to team-mate Winterbottom on the run to the first corner.

“There wasn’t much in it but the little bugger squeezed me and I really didn’t want to tap him into the wall,” smiled a still upbeat Mostert, who sits fourth in the championship standings.

“He was probably using our team-mate friendship a bit much there, but that’s the way it goes.”