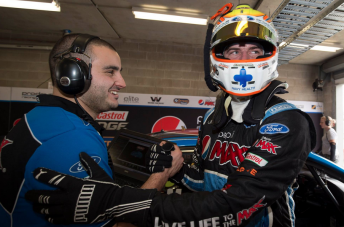 Chaz Mostert scored his sixth pole of the season by edging out Prodrive team-mates Mark Winterbottom and David Reynolds in qualifying for Race 16.

The youngster pipped Winterbottom by 0.06s with a lap set moments after the chequered flag flew.

The 20 minute session, which saw all cars on new hard tyres, backed up the Pepsi Max Falcon’s strong practice form.

“We rolled out pretty strong in practice and we’ve worked hard together as a team,” beamed Mostert.

“Now we’ve just got to get it off the line and keep away from the mess.”

DJR Team Penske’s Scott Pye led the way after the first of two green tyre runs for the majority of the front-runners.

The #17 Ford dropped from first to fifth in the final minute, however, behind the three Prodrive entries and Scott McLaughlin’s Volvo.

McLaughlin’s encouraging speed came despite the team being forced into an engine change following a failure in morning practice.

Craig Lowndes only complete just one green tyre run and didn’t have the speed when it mattered, ending up 14th.