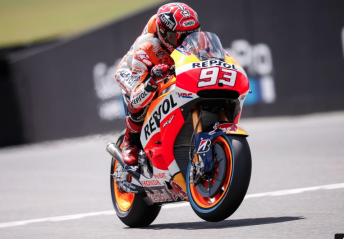 Marc Marquez on his way to pole position

Marc Marquez continued his recent resurgence by securing pole position for the MotoGP German Grand Prix at the Sachsenring.

The Honda rider topped the times in all four practice sessions before transferring his pace into qualifying to claim pole position by 0.292s from his team-mate Dani Pedrosa.

Marquez lit up the timing screens early in the session but he was unable to relax as Pedrosa briefly eclipsed the reigning world champion’s effort in the dying minutes.

However, Marquez issued an immediate response by posting a 1:20.336s effort to further stamp his authority on the event.

Jorge Lorenzo will complete the front row in third with the Yamaha 0.5s adrift of the impressive Marquez.

Ducati’s Andrea Iannone was fourth fastest ahead of Colombian Yonny Hernandez, who scored his career best qualifying result in fifth.

It proved to be a difficult session for championship leader Valentino Rossi as the nine-time world champion was only able to post a time good enough for sixth spot.

The Suzuki of Aleix Espargaro was seventh quickest ahead of brother Pol Espargaro (Tech 3 Yamaha) and his team-mate Bradley Smith.

Australia’s Jack Miller will start from 18th on the grid aboard the Open Class LCR Honda.