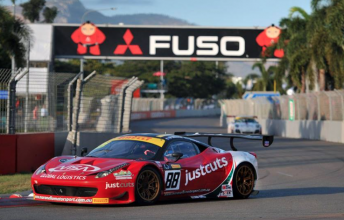 Maranello Motorsport has inherited the victory in the first of two Australian GT Championship races at Townsville after winners Andrew MacPherson and Brad Shiels were hit with a penalty.

The #88 Maranello Ferrari 458 GT3 of Tony D’Alberto and Grant Denyer has been awarded the win after the Porsche of MacPherson and Shiels was issued with a time penalty for a pit stop infringement.

Stewards ruled that the #51 crew failed to complete their compulsory pit stop time duration and have subsequently been issued with a 192 second penalty.

The penalty has elevated D’Alberto and Denyer to victory ahead of the McLaren 650s of Tony Quinn in second, with the Geoff Emery/Max Twigg Erebus Motorsport Mercedes SLS promoted to third.

Maranello’s triumph is the first Australian GT win for television presenter Denyer in only his second appearance.

D’Alberto and Denyer will start Sunday’s Race 2 from pole position.