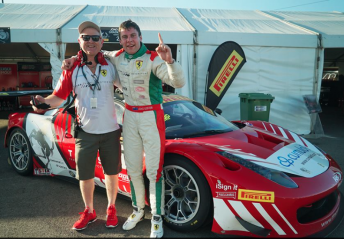 The Trass Family Motorsport Ferrari was involved in a duel with the Jamec-Pem Audi R8 of German GT star Christopher Mies, but it was Lester who came out on top.

The Kiwi set the pace from the outset before improving his time to a 1:12.1179s to eclipse the 1:12.9s effort which earned Maranello Motorsport provisional pole position on Friday.

The best times set across the two qualifying sessions set the grid for the third round of the championship.

Mies took the fight to Lester as he posted a time just 0.040s adrift in the dying minutes of a session, which was extended by five minutes due to a red flag triggered by Michael Hovey’s Ginetta.

In the end, Lester hung on to follow in the footsteps of Allan Simonsen and Greg Crick by scoring three consecutive pole positions in the championship after triumphs at Adelaide and Phillip Island this year.

Clipsal 500 round winner Nathan Antunes will line up in third position alongside Brad Shiels in the AMAC Motorsport Porsche.

The Maranello Motorsport Ferrari of Tony D’Alberto and Grant Denyer will share the third row of the grid with the Darrell Lea McLaren 650s of Klark Quinn.

Steve Owen’s time set in Friday’s qualifying session was enough for Kevin Weeks’ owned Ford GT to hold onto seventh on the grid.

The first of this weekend’s two 46 lap Australian GT Championship races will begin at 11:55.