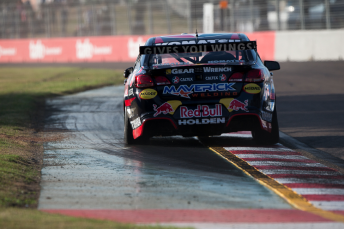 As revealed on Thursday, Red Bull has made the bold move of stepping last year’s championship winning engineer David Cauchi out of the position after a succession of poor results.

With Lacroix unavailable this weekend before taking over the job from Queensland Raceway, the team’s decision to effectively change engineers twice has raised eyebrows.

In addition to immediately removing pressure from Cauchi, Dutton says that his one-off appointment has been made to help rebuild Whincup’s confidence, which has suffered greatly over recent events.

“It’s about getting the team together, bolstering up JW,” Dutton told Speedcafe.com.

“Let’s see if we can get the most successful combination back together, even if it’s just for one show only to get things back on the road.

“Obviously the overall goal is to get better results, but it’s already done part of what we want it to do.

“JW has come here really confident, just because of the change and the history. He has a really good, positive outlook.”

Whincup and Dutton are the most successful driver/engineer combination in the category’s history, winning five championships together over the 2008-2013 period.

Having graduated to team manager at the start of last year, Dutton says race engineering Whincup full-time again was not an option.

“If we were a one car team we’d definitely look at it, but we’re a two-car team,” he said.

“Roland is busy doing his normal stuff and he can’t just drop that and be team manager full-time.

“We’ve got a routine that works well now with me as team manager and we don’t want to shake things up that much.

“I love being a race engineer, don’t get me wrong, and I’m excited to do it here this weekend, but team wise we didn’t think it was a good thing to do for the rest of the season.”

Whincup was 19th, 12th and 15th across the three Friday practice sessions in what appeared another lacklustre day for the six-time champion.

Dutton, however, reports that practice had been going to plan before being caught out by a lack of gain with the green tyres at the end of the day.

“Jamie was quite happy with the car ready for the greens to go on and we didn’t get the gains we thought we’d get and we have to understand why,” he said.

“Even though we weren’t at the top of the leader board, everything was making sense for where we were with tyres.”

Teams will have a final practice session this morning to hone their set-ups ahead of qualifying and the opening 200km race of the weekend.

VIDEO: Hear from Whincup and team-mate Craig Lowndes after practice