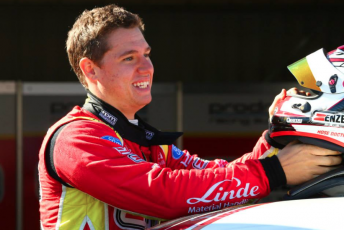 Cameron Waters continued his domination of the Dunlop Series as he topped the times in practice at the Castrol Edge Townsville 400.

The Prodrive Racing Australia driver was quickest in both 30 minute sessions at the Reid Park circuit with his personal best of 1:14.49s arriving in the afternoon hit-out.

Waters was challenged for the top spot in second practice when Chris Pither briefly enjoyed a spell atop of the timesheets.

However, the Dunlop Series championship leader responded in the final minutes to ensure he finished quickest ahead of tomorrow’s qualifying session.

Fellow Eggleston Motorsport runner Ant Pedersen was fourth fastest despite suffering from back pain incurred in the opening session.

The Kiwi was forced out of Practice 1 as result of the injury with the Super Black Racing V8 Supercars co-driver undergoing physio treatment between sessions.

Todd Hazelwood was fifth just fractionally ahead of Garry Jacobson and Shae Davies.

Matt White Motorsport’s Jack LeBrocq was a second shy of Waters in eighth, while James Golding and Macauley Jones rounded out the top 10.

Bryce Fullwood encountered the only real drama in the both sessions as he suffered a right rear suspension failure in Practice 2.

Meanwhile, an illness restricted Andrew Jones’ running in the final hit-out as the Brad Jones Racing driver elected to end his day prematurely.

The Dunlop Series will return to action on Saturday with a 35 minute qualifying session before a 21 lap race scheduled to begin at 14:20.