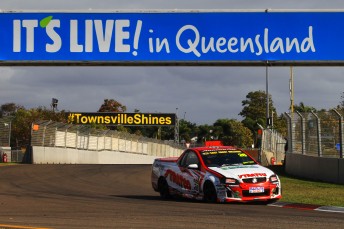 Rhys McNally produced record pace as he headed the times in practice ahead of the fourth round of the V8 Utes Racing Series on the streets of Townsville.

The Perth driver posted a 1:26.97 in the second practice session at the Reid Park circuit to break the practice lap record.

“It’s great to see we have good pace, we just have to keep it up tomorrow and hopefully we’ll walk away with a pole position,” said McNally.

Nathan Pretty was 0.1s shy of McNally’s Stratco Holden with David Sieders in third, as the Ford runners struggled for outright speed.

Ryan Hansford was the quickest of the Fords in seventh 0.9s adrift of McNally.

Championship leader Ryal Harris and his Matt Stone Ford team-mate George Miedecke were unable to unlock the pace required to challenge the frontrunners, as they ended the day in 10th and 11th respectively.

The pair were both carrying success ballast which hampered their progress.

“I know which way it goes (the track), I’m confident of that, as for confidence in the car I will really need my experience to just get me through,” said Marshall.

“It’s definitely making things a lot harder to get through the weekend, but other than that I’m loving being here and really looking forward to the rest of the weekend.”