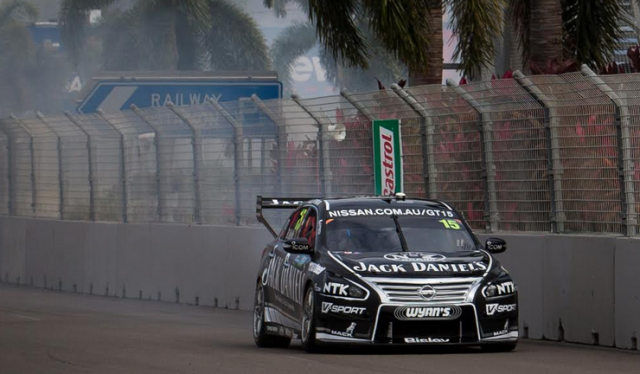 Rick Kelly will revert to one of Nissan Motorsport previous specification engines for the remainder of the weekend after striking trouble with his upgraded unit in Practice 3.

The driver was forced to park the #15 Altima on the side of the circuit after a failure saw smoke begin to pour from the car.

Kelly’s car had received its new engine at the circuit on Thursday after a late sign-off of new parts with V8 Supercars.

The former champion described the issue to Speedcafe.com as a ‘minor setback’ amid the team’s determined push to improve its package.

“It caught me by surprise a little bit because we’ve had that good reliability that I haven’t had a big smoke bomb come out of the back of the car like that in three or four years,” said Kelly.

“The only unfortunate thing is that I’ve been making Winno (mechanic David Winstone) and the guys work pretty hard for the last couple of rounds.

“We’ve had gearbox changes and clutch changes between sessions a fair bit and now we’ve got an engine.

“But it hasn’t really hindered us, we’ve had a reasonable practice run. We’ll put the other engine in and see how we go from there.”

The team’s engineering manager Scott Sinclair hinted that the upgraded engine will return for the next event on the calendar at Queensland Raceway.

“We’re going through a development process at the moment and pushing as hard as we can,” said Sinclair.

“We’re not happy about where we’re at, we want to be winning races so we’re pushing hard. We think we know what’s happened so it’s no big deal.

“The engine that’ll go back in is the same one that was on pole in Darwin, so we’re not too concerned.”

Kelly was 20th, 19th and 24th in today’s three sessions, but is optimistic of a stronger showing on Saturday.

“Townsville’s a track where it’s reasonably difficult to get a perfect set-up because there’s various different styles of corner,” he said.

“It’s probably even more difficult to get the best lap out of it from a driver’s point of view as well.

“It takes a while to get everything right and we were just hitting our straps there in the third session.

“We did a two-lap run that was reasonably competitive at that time on that tyre but then we were cut short.

“The biggest thing is that there’s another session tomorrow, so we should be in a reasonable position if we do a good job.”