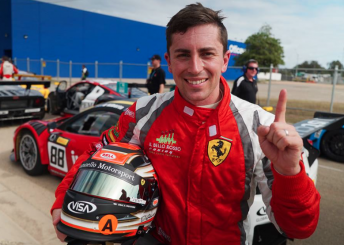 A blistering effort from Tony D’Alberto landed Maranello Motorsport provisional pole position for the third round of the Australian GT Championship at Townsville.

The former full-time V8 Supercars driver, sharing the drive with television presenter Grant Denyer, was untouchable in the 20 minute session posting a 1:12.97s effort behind the wheel of the #88 Ferrari 458 GT3.

However, the pole position remains provisional with the field set to take part in a second qualifying session on Saturday morning.

The Australian GT Championship field will return to the Reid Park circuit at 07:35 tomorrow (Saturday) with the first of two, 46 lap races to begin at 11:55.