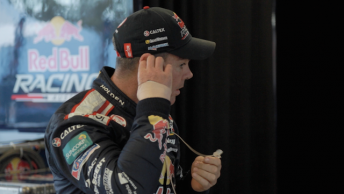 Craig Lowndes is nursing an injury to his right wrist at this weekend’s Castrol Edge Townsville 400.

Lowndes fell off a bike recently and suffered ligament damage to his wrist.

He finished 17th in Practice 1 setting a best lap of 1:14.78s as Mark Winterbottom set the pace.

The three-time champion reported no issues from the injury while in the car.

“It didn’t give me any problems in the session,” Lowndes told Speedcafe.com

“I have it bandaged and I’m wearing a cast so my wrist doesn’t bend back and aggravate the injury.”

Lowndes is currently second in the points standings behind Winterbottom heading into the two-race Super Street format at the Reid Park circuit.