Mark Dutton will move back onto Whincup’s car this weekend

Mark Dutton will return to race engineering duties on Jamie Whincup’s car this weekend as part of Red Bull Racing Australia’s efforts to propel the six-time champion back into title contention.

Speedafe.com can reveal that Whincup’s engineer of the last 18 months, David Cauchi, has been dropped back into a ‘wingman’ role following struggles to find strong set-ups on the #1 Holden over recent events.

Despite winning the championship together last year, the Whincup/Cauchi partnership has failed to produce a top five finish in the last seven races, dropping to eighth in the standings as a result.

The driver has spoken openly of struggling for confidence amid the slump, which threatens to end his run of five straight titles.

Dutton had engineered Whincup from 2007 to 2013, picking up five championships together before the former was promoted to team manager.

The pair will only be reunited for this weekend, however, with the team’s technical director Ludo Lacroix to take up the race engineer position from the next round at Queensland Raceway.

Lacroix, who usually attends races in an overarching engineering role, is away this weekend working on other projects. 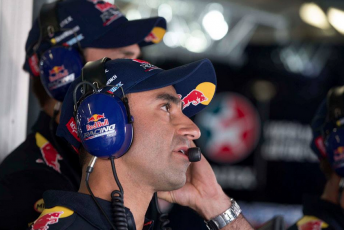 David Cauchi has been under the pump this season

The Frenchman was Whincup’s first race engineer when the driver joined the team in 2006.

“It’s just to take the pressure off,” Dane told Speedcafe.com.

“We just got too much pressure on the system and we need to make it work better.

“He (Cauchi) is still part of the team and part of the family and will be for a long time.

“We’ve just got to relieve the pressure and give the confidence to Jamie that he needs and the crew around him and stop caning David as hard.”

Dane stressed that Cauchi’s revised position is not a return to data engineering duties, which he had undertaken for Whincup in the past.

“It’s a bit more than he used to be in a data role; it’s more a performance engineer than a data man,” he said.

“Ludo has been helping Cauchi in the background but we needed to formalise that arrangement and make it more structured.”

Craig Lowndes, who is enjoying a strong bond with new-for-2015 engineer Grant McPherson, is currently well clear of Whincup in second place.

“Whether he will be back in championship contention we will wait and see,” said Dane.

“I’ve got Lowndesy in championship contention and I’m very pleased to be in that position.

“But by our standards its certainly not where we would like to be in Jamie’s case.”