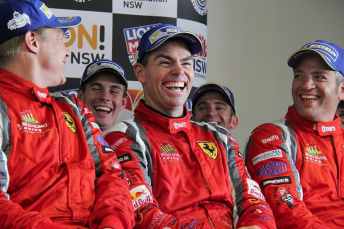 Craig Lowndes after winning the Bathurst 12 Hour in 2014

V8 Supercars drivers are hopeful that the category’s impending purchase of the Bathurst 12 Hour will see both classes tackle the mountain on the same weekend in future.

The prospect of V8 Supercars shifting its pre-season test from Sydney Motorsport Park to Bathurst has emerged as a possibility following the revelation that it is set to take control of the GT event.

While key players are refusing to speak on the matter, Speedcafe.com sources insist that a deal to see V8 Supercars buy the 12 Hour from its current promoter is as good as done.

What impact the move will have on future 12 Hour events remains somewhat less clear.

An existing television agreement with the Seven Network will likely leave little changes for 2016 as V8 Supercars is tied exclusively to Fox Sports and Network Ten.

V8 Supercars legend and former Bathurst 12 Hour winner Craig Lowndes however says that running the V8 test as part of the GT meeting would be a welcome move if it could eventually be achieved.

Lowndes, Shane van Gisbergen, Rick Kelly, Will Davison and Jason Bright all competed in the 12 Hour last year, but were unable to return in February due to the infamous clash with the Sydney V8 test.

“It’s always nice to have a solution and it’s something that Shane and I were looking forward to,” Lowndes told Inside Supercars when asked of the mooted V8 Supercars tie-up with the 12 Hour.

“It’s great to hear that we could potentially be up there on the same weekend with both cars.

“Bathurst would be an exceptional track to go and test at,” he added.

“You wouldn’t do too many laps over the course of the day because it’s such a long circuit.

“But it’s got everything; low speed, high speed, undulation, everything you would want to make the car right.”

Having previously juggled two categories during the V8 test weekend in 2013, Van Gisbergen admits jumping between cars would be a challenge for drivers.

“I remember back in the day I tested in New Zealand on Friday in SuperTourers, came and did the test at Eastern Creek on Saturday in the Supercars and then flew back Sunday for the racing in the SuperTourers,” he said.

Regardless of any V8 Supercars track time, the category’s involvement in the Bathurst 12 Hour will ensure that its drivers are once again free to take up rides in GT machinery.

This year’s race was won by Nissan’s international trio of Katsumasa Chiyo, Wolfgang Reip and Florian Strauss while the company’s Australian stars were tied to the V8 test day.