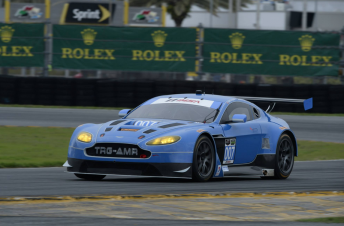 In a surprise move, the team has announced that the 28-year-old will be replaced by Canadian Kuno Wittmer in the #007 Aston, which is co-driven by Christina Nielsen.

Wittmer had subbed for Davison at the most recent round of the championship at Watkins Glen while the Australian undertook Pirelli World Challenge duties at Road America.

Davison has raced with TRG since the end of 2013, scoring five consecutive pole positions over the 2014/2015 seasons.

While Davison declined to comment on the matter when contacted by Speedcafe.com, financial pressures are understood to have played a role in the decision.

“James Davison has filled a great role with the team since first coming on board in 2013 but with his increased schedule and focus on other opportunities and roles, the very tight competition in GTD, and our increased sponsor commitments, we needed to make sure that all focus was on achieving our team, driver, sponsor, and manufacturer goals for the balance of 2015 season and beyond,” he said.

Davison has five PWC rounds with the Always Evolving Nissan team remaining this season, which continues at Mid-Ohio on August 1-2.

He sits fifth in the GT standings after taking his second win of the year at the recent Road America event.