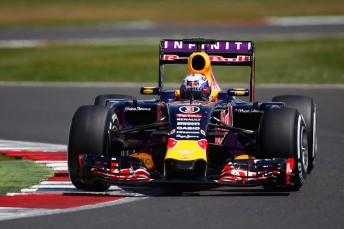 Daniel Ricciardo has been cleared of any wrongdoing for his involvement in a multiple car crash on the opening lap of the British Grand Prix.

The Australian was called to the stewards office after contact with Lotus driver Romain Grosjean sparked a crash at Village corner which saw the deployment of the Safety Car.

Ricciardo made slight contact with Grosjean which speared the Frenchman into his team-mate Pastor Maldonado forcing the pair out of the race.

In a chain reaction, McLaren’s Fernando Alonso swiped his team-mate Jenson Button as he swerved to avoid the Lotus duo, which prematurely ended the Brit’s home race.

All five drivers were called to the stewards office after the race where it was deemed no further action would be taken.

“After hearing from all the drivers involved in the turn 3 incident at the start of the race, it was decided that no driver was wholly or predominately to blame,” said the stewards.

Ricciardo’s race went from bad to worse as he retired on lap 23 when his Red Bull RB11 encountered an electrical fault.

The team attempted to reset the system before he was forced to return to the pits to retire the car.

“I was really optimistic and excited for this weekend but it didn’t work out for us on the day,” said Ricciardo.

“We suffered an electrical problem which forced us to retire.

“I could feel the loss of power going into turn 7, we tried circulating for a few laps to try and fix it, we also tried to reboot the engine in the pits but unfortunately it didn’t work.

“The last few races haven’t been kind to us but that’s racing.

“We have some time off to look forward to and we’ll go into Hungary a little more hopeful as the track there should suit us better.”

Th Red Bull team confirmed that Renault will begin an investigation into the electronic issue during the three week break between the next race at Hungary.