VW battle at the point in Poland

VW battle at the point in Poland 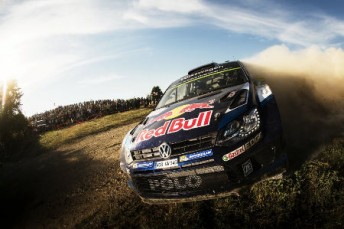 Ogier heads a VW 1-2 in Poland

Volkswagen team-mates Sébastien Ogier and Andreas Mikkelsen will go head-to-head in a final day showdown to decide the outcome of Rally Poland.

Ogier ended Saturday’s penultimate leg with a 5.6sec lead over Mikkelsen with just two speed tests and almost 30km remaining in which to decide this seventh round of the FIA World Rally Championship.

Despite cleaning the sandy gravel tracks in his position as road opener, series leader Ogier extended his 2.1sec overnight advantage to 7.2sec over the morning’s four special stages.

Tyre choice again proved decisive in the afternoon’s warm temperatures, which reached 32˚C. Mikkelsen’s choice of Michelin hard compound rubber proved more suited to the conditions than Ogier’s mix of hard and soft, and he reduced the deficit.

“I’ve been cleaning the roads since the start so to lead is fantastic, but we have to finish the fight tomorrow. I wasn’t so sure about my tyre choice this afternoon because they were moving a lot. It wasn’t a perfect choice,” said Ogier.

Mikkelsen could have been even closer to his Polo R rival had it not been for hanging dust in the penultimate stage. “There was so much dust I couldn’t see in places. I pushed to the maximum but lost time in the dust. On hard tyres, I think that was my chance,” he said.

He needed every available kilometre to rein in Ogier, but the cancellation of a stage this afternoon for safety reasons (excessive spectators) further dented his chances.

The fight for third was just as intense. Jari-Matti Latvala held a 5.9sec advantage last night but, despite an opening stage spin, Ott Tänak won two morning stages to head the Finn by a tenth of a second at the mid-leg service. 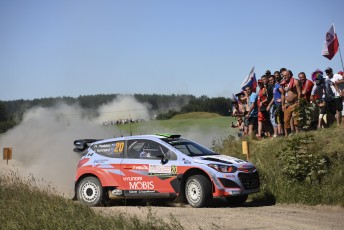 A rejuvenated Latvala briefly regained position but the Estonian added a third win to end the leg with a 1.5sec lead in his Ford Fiesta RS.

New Zealand’s Hayden Paddon retained fifth and achieved his target of building a 20sec cushion over Hyundai i20 team-mate Thierry Neuville, while local hero Robert Kubica survived two overshoots in his Fiesta RS to hold seventh ahead of a closing Kris Meeke.

“We have had another reasonably satisfying day and I think we can be pleased to be in the top five,” said Paddon.

“The car felt good, the driving was clean and the times were decent. There are lots of positives to take from today and we now aim to defend our fifth place tomorrow.”

The only retirement was Elfyn Evans after his Fiesta RS stopped with a broken water pump, while Dutchman Kevin Abbring lost three minutes after beaching his i20 in soft sand. 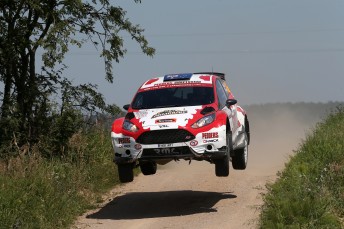 Scott Pedder had a solid day in WRC2

Australia’s Scott Pedder enjoyed what was his best day of competition in the WRC2 category grabbing a string of top ten class times in his Fiesta.

“It’s hard to judge your pace against the top WRC2 drivers, particularly the Skoda’s, because they are setting times as quick as the World Rally Cars.”

The final leg comprises two passes over the 14.60km Baranowo stage, the second of which forms the TV Power Stage, with bonus points to the fastest three drivers.