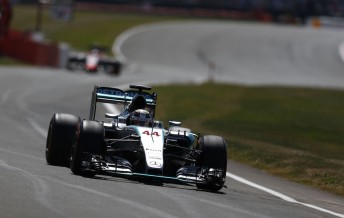 Lewis Hamilton claimed his eighth pole position of the season as he pipped Mercedes team-mate Nico Rosberg in qualifying for the British Grand Prix.

The reigning world champion topped the time sheets with his first and only effort in Q3 at the Silverstone circuit.

After aborting his final run, Hamilton’s 1:32.248s effort on the medium compound rubber proved to be just 0.113s quicker than Rosberg as the Mercedes duo fought out a tense duel for pole position.

While Mercedes locked out the front row, Williams produced the surprise of the session with Felipe Massa and Valtteri Bottas beating the Ferraris to third and fourth.

Although an impressive achievement, third placed Massa was 0.8s adrift of the all conquering Mercedes pair.

The Finn was however lucky to be involved in the top 10 shootout after his best lap time in Q2 was deleted for exceeding track limits.

Daniel Ricciardo rounded out the top 10 although the Australian’s best effort in the session was deleted for exceeding track limits at Copse corner.

Sergio Perez was the first to miss out on a place in the Q3 shootout and will start from 11th alongside the Lotus of Romain Grosjean.

A frustrated Max Verstappen was unable to mimic his impressive performances in practice with the Toro Rosso driver complaining of a lack of grip, which restricted him to 13th position.

Pastor Maldonado compounded a disappointing day for Lotus in 14th ahead of the Sauber duo of Marcus Ericsson and Felipe Nasr.

It was another trying day for McLaren as both Fernando Alonso and Jenson Button failed to progress to Q2.

A leak in the hybrid system threatened to rule Alonso out of the session before it had even begun, but the Spaniard was given the all clear to take part by the team.

Alonso will line up in 17th spot alongside Button in 18th to form the penultimate row on the grid in front of the two Manor Marussias.