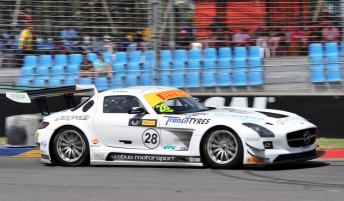 The Australian GT Championship will debut its revamped driver seeding system with a capacity field of 34 cars in Townsville.

As previously reported, the number of seeding grades has been increased from four to 12 in an attempt to more accurately account for the field’s varied driving talent.

The seedings, allocated at the discretion of AGTC management, determine the length of the compulsory pitstop time for each car in the two 60 minute races.

The championship leading Christopher Mies/Greg Crick Audi will be unaffected by the changes, remaining with a 54 second stop time (36s applied for Mies and 18s due to Crick).

Conversely, the biggest beneficiaries will be the former Pro drivers who have now been classed as PR02 or PR03, which include Steve Owen (Ford), Steve Johnson (Audi), Tony D’Alberto (Ferrari) and Jack Le Brocq (Chevrolet).

Only Mies, Lester and Steven Richards (Chevrolet) have been classed as PR01s and continue with the full Pro 36s penalty.

The field is largely unchanged from the Phillip Island 101, with the return of the second Erebus Mercedes the most notable inclusion.

Morgan Haber will again drive the car, which was re-shelled in Germany following the youngster’s crash at the Clipsal 500 season opener.

See the full entry list, including pitstop time penalties, below