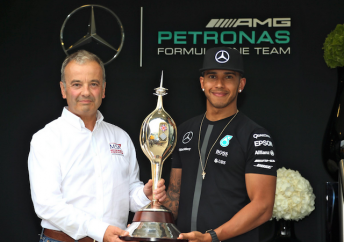 Double world champion Lewis Hamilton has been awarded the Hawthorn Memorial Trophy for a fourth time on the eve of the British Formula One Grand Prix.

The honour is bestowed to the most successful British or Commonwealth driver of the previous F1 season.

Memories of Hawthorn, who died in a road accident in 1959, will be brought to the fore as Sunday marks the 62nd anniversary of his first F1 win at Reims.

Hamilton claimed 11 victories last year including his home race, the British GP, on his way to his second F1 title after winning in only his second year in the top category in 2008.

“This trophy is full of class. It’s real silverware with a great history and that’s what I race for; this is the best reward you can get for winning,” Hamilton said who previously won the trophy in 2007, 2008 and 2012.

“It’s real and it’s what you have to show for all your efforts, so I’m very grateful to receive it.”

Hamilton had earlier in the week been bemoaning the quality of some trophies including those presented in Austria last weekend which were made of wood.