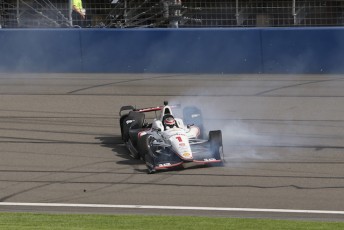 Will Power received a $25,000 fine after shoving an official following his crash at Fontana last weekend

Australia’s defending IndyCar Series champion Will Power has received a $25,000 fine for improper conduct after crashing out of the Fontana race last weekend.

Power pushed a safety official after crashing out following contact from Takuma Sato with nine laps remaining in the wild 250-lap affair.

IndyCar has placed Power on probation for the remainder of the season after contravening Rule 9.3.1 that deals with using improper, profane or disparaging language or gestures in reference to any official.

Power was prompt to offer a personal and public apology to the official immediately after the MAVTV 500.

“I want to apologise to the safety guy,” Power Tweeted.

“I shouldn’t have pushed him and I’m sorry for that. I was extremely upset, but I know that’s no excuse.

“I also apologised to him in person.”

The race winning Rahal Letterman Lanigan squad was hit with a $10,000 fine after a pit violation when it released Graham Rahal back into the action with the fuel hose still attached to his #15 car.

In other penalties, Tristan Vautier received a $10,000 fine for contact with pit crew while bonuses and penalties were handed out to both Honda and Chevrolet.

In the wake of the adjustments Chevrolet sits on 1108 points ahead of Honda’s 921.