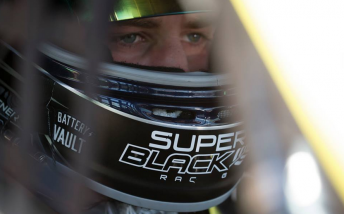 Super Black team principal Paul Radisich has urged rookie driver Andre Heimgartner not to be distracted by the success of his star Prodrive stablemates.

All three have staked their claim as title contenders, sitting first, fourth and eighth in the standings respectively.

First-year V8 Supercars Championship driver Heimgartner has meanwhile had a modest start to his campaign, placed 24th in the championship ahead of Townsville.

The Kiwi scored a top 10 finish on debut with the FG X at Symmons Plains, but has not been able to repeat the feat since.

“There’s no doubt that having the team-mates he does adds a lot of pressure because those guys are very experienced and know the team very well,” Radisich told Speedcafe.com.

“He’s trying to benchmark himself (against them) because, when you’re a competitive driver you always look to what your next door neighbours are doing.

“But we’re saying ‘don’t benchmark, you’re in a different sphere to these guys’.

“We’ve seen a level of success (for Andre) in Tasmania and we know that the ride for a rookie in this championship is up and down,” he added.

“Whenever a new guy comes into the series it takes a while to settle in, but I think all in all things are going along pretty well.”

The 20-year-old Heimgartner is carrying Super Black’s hopes while management works to sure up the team’s future beyond 2015.

Radisich enthuses that the Super Black concept is gaining traction in New Zealand’s corporate sector, but concedes that results are an important part of the equation.

The Super Black Ford ran in the colours of fellow Tony Lentino-owned business, Only Domains, at Barbagallo and Winton before reverting to its black hues in Darwin.

“It’s building, it’s gaining momentum,” Radisich said of the team, which is currently on the hunt for a Racing Entitlements Contract to race under in 2016.

“We’ve got quite a few activations coming through beyond Townsville that are outside of Tony’s businesses.

“The brand is starting to become more known and we’ve got some big retailers in New Zealand that are starting to look at the program and come on.

“It’s important that we have some results on the track. At the end of the day that’s how everything gets reviewed.”