Harris to front stewards ahead of Townsville

Harris to front stewards ahead of Townsville 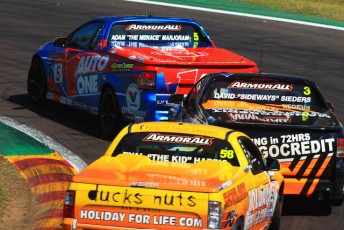 V8 Utes Series leader Ryal Harris will face stewards a day before Round 4 kicks off in Townsville next week over an outstanding infringement from Hidden Valley.

Harris caught the ire of stewards for an overtaking move on David Sieders in the final race in Darwin.

The Ford driver faces the prospect of being hit with a 27 second time penalty, which would drop Harris from fifth to 25th in the race result.

If that is imposed it would bring George Miedecke to within 13 points of Harris’ series lead.

Harris has already been handed a $500 suspended fine for a clash with Adam Marjoram in the same race.

“Either way if I do get a penalty, I’ll still be leading the championship but I’d rather be leading by a lot more,” Harris said.

“I didn’t think that the penalty fitted the accusation so that is why we are going to the hearing, so we’ll go to the hearing present our evidence and see what happens I guess.”

In other stewards action from the Darwin meeting, Bruce Oaklands was served with a $1,000 fine, suspended until December 31 for contact with rookie Leigh Nicolaou in Race 3.

A investigation will also take place for alleged contact on the opening lap between Cam Wilson and Craig Dontas.

The stewards hearings will be held ahead of opening practice at Townsville’s Reid Park circuit starting at 9.40am on Friday, July 10.