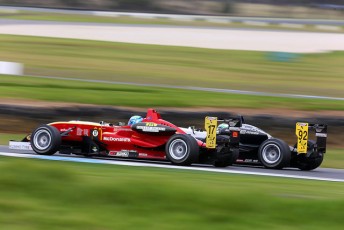 The Australian Formula 3 Championship is set to welcome its biggest grid of the year at the Sydney Motorsport Park Shannons Nationals round this weekend.

A field of 11 cars will do battle at the New South Wales venue which has been boosted by the addition of several new and returning competitors.

The championship’s largest entry of the year comes after CAMS revealed the championship will be demoted to a state based series from 2017.

R-Tek Motorsport’s Roland Legge returns to the series behind the wheel of a former Double R Racing Dallara.

Legge, who missed rounds at Phillip Island and Winton, finished second in the opening meeting at Sandown and is set to join the battle at the front between Jon Collins and Ricky Capo. Dennie Rumble will also return to the R-Tek Motorsport having contest the second round at Phillip Island.

Meanwhile, Luke Ellery will pilot an ex-Valtteri Bottas Dallara F311 as he plans to be the first driver to contest the Australian Formula 3 and Formula Ford rounds on the same weekend.

“I’ve only tested a Formula 3 car once several years ago and I’ve never driven this particular car, so it’s going to be a pretty big day on Friday learning the F3 car and swapping between that and the Formula Ford.

“I’ve watched as much of the Formula 3 on board vision as I can and filed that in one part of my brain.

“I know how big this is and I’m not taking it for granted – it’s going to be one of the toughest things I’ve ever done.”