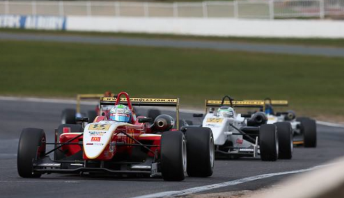 Formula 3 and Formula Ford administrators have been left to assess the possibility of running outside CAMS jurisdiction in future following their axing as national classes.

CAMS announced today that it will downgrade Formula Ford to a state level competition next year following the governing body’s review of the Australian motorsport landscape.

Formula 3 has been given a single year as a CAMS Authorised Series before it is also slated for state duties from 2017.

The news came as a particular shock to Formula 3 Management, which had enjoyed public support from CAMS while the review was unfolding.

An F3M statement in the wake of the announcement has confirmed that the category will attempt to use the shake-up as a way of reducing costs.

“Plans are already underway for a state-level based yet nationally campaigned ‘F3 Cup Super Series’ which will retain all the professional aspects of the current model but remove the significant related CAMS championship fees from the operating costs of running a championship,” read the statement.

“Despite a one-year grace period that allows for Formula 3 to run as a CAMS Authorised Series until the end of 2016, F3M will investigate switching to the new model following the completion of this year’s championship to instantly pass on the significant cost savings to owners and operators of Formula 3 machinery in Australia.”

The most obvious option available to both F3M and the FFA is to formulate their own national points scores based on the results of a succession of CAMS-sanctioned state level events.

Such a move would leave little change from their current operations, aside from losing the prestige of officials national titles and the associated administrative costs.

Breaking away entirely and running under another sanctioning body, namely the Australian Auto Sport Alliance, has also been flagged as a possibility.

That option, however, would likely require rejigs of branding and regulations in order to dissociate with CAMS, as well as additional hurdles of sourcing cost effective insurance and trackside marshals.

Similar predicaments also face the Saloon Car and Superkart communities as they will also have their national status stripped as part of the category rationalisation process.

CAMS’ announcement that it is exploring the possibility of a regional F3 Championship from 2018 has meanwhile been met with a lukewarm response from F3M.

Japan hosts the only other F3 championship in the region following the failure of the previous Asian championship last decade.

“The dissolution of a national F3 competition in Australia would make the establishment of a regional series – which would undoubtedly be significantly driven by Australian teams and participation – extremely difficult if not nigh on impossible,” continued the statement.

“As much as the FIA is encouraging regional Formula 3 championships, the cost of logistics within this region may well make such a series financially unfeasible.”

Having publicly floated the possibility of running outside of CAMS in Speedcafe.com’s earlier story on the review, FFA chairman John van Leeuwen says that the FFA continues to assess its options.

CAMS’ future plan for Formula Ford includes an annual festival event, bringing together the best of the state level runners.

Van Leeuwen is supportive of the festival idea, but says it does not substitute for a national series.

“We’ve talked about doing a festival ourselves for quite some time, but it’s not been something that’s been a focus,” he told Speedcafe.com.

“It’s a great idea, but I’m sure that for the majority of the teams that have invested in Formula Ford, that’s not going to cut the mustard.

“Drivers want to be able to go to all the tracks and be able to participate in a series in order to develop their skills.”

The F3 Championship and Formula Ford Series will both be in action at Sydney Motorsport Park this weekend, boasting fields of 11 and 18 cars respectively.

CAMS will launch its own Formula 4 Championship at Townsville in less than a fortnight, for which nine drivers are currently confirmed.