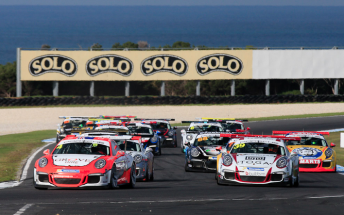 Porsche Cars Australia has spoken to CAMS expressing its ‘profound disappointment’ over the decision to reclassify the Carrera Cup as a national series.

The move was one of several changes made to the Australian motorsport landscape as part of a new three-tier structure, set to take hold next year.

Just four national championships have been left following the review, shared between V8 Supercars, Australian GT (which will hold sprint and endurance championships next year) and Formula 4.

CLICK HERE for a full rundown of the changes.

The downgrade is viewed in Porsche’s eyes as tarnishing the brand, undermining the high professional standard which it adheres to.

“We are extremely disappointed that CAMS, for reasons, unbeknown to us, has seen to downgrade the Porsche Carrera Cup Australia from national championship level,” Porsche Cars Australia motorsport director Paul Ellis told Speedcafe.com

“We certainly hope this is nothing more than a bureaucratic oversight and that CAMS will reassess Carrera Cup in Australia as an absolute priority.

“It needs to be returned it to its rightful place as a national championship which it has been for a number of years now.”

The championship, which features identical 911 Cup cars built out of the motorsport division in Weissach, ran in Australia from 2003 to 2008 before being revived in 2011.

“We have spoken to CAMS to express our profound disappointment and they have indicated to us that they will revisit the structure as a priority,” continued Ellis.

“We look forward to some news from CAMS within the next 24 hours that will reinstall Porsche Carrera Cup Australia to its rightful place as one of the best subscribed and professionally run motorsport championships in Australia.”