ANDRA unmoved by ‘ultimatum’ from tracks

ANDRA unmoved by ‘ultimatum’ from tracks 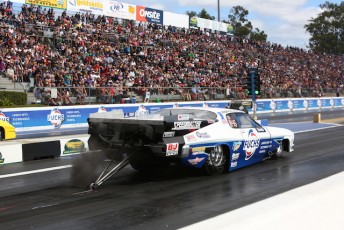 ANDRA has vowed to continue to run its championship next season

ANDRA has vowed to continue its Drag Racing Championship next season, slamming an ultimatum from its three premier tracks as ‘counterproductive’ to the sport.

As announced this morning, Queensland’s Willowbank Raceway, Sydney Dragway and Perth Motorplex have joined forces to form their own championship following differences of opinion with ANDRA.

In a letter sent to members directly prior to the announcement, ANDRA chairman Michael Fotheringham says his administration refused to bow to an ultimatum delivered by the three venues.

According to Fotheringham, the ultimatum was delivered at a meeting of the sport’s stakeholders on June 6 and consisted of the following points.

• ANDRA not reappoint the current CEO.
• Terry Jongen and Phil Parker as Divisional Directors representing members on the board resign.
• ANDRA return to being a sanctioning body only.
• ANDRA return the Group 1 rights to an entity set up by the three venues (Drag Ltd V2).
• The three tracks have a direct line to ANDRA to make rule changes and circumvent the formal process.
• Costs to tracks are immediately reduced.

“ANDRA has always respected the role of tracks in our sport,” Fotheringham wrote to ANDRA members.

“However, ANDRA cannot agree to their ultimatum as we do not believe it’s in the best interests of our members and the sport as a whole.

“ANDRA has already changed its strategy for the better to return the sport to growth. With massive member support for and involvement in change, we are getting there.”

Fotheringham stressed that “the door remains open for the three tracks to engage with ANDRA”.

“The championship is secure and we will make sure the ANDRA Drag Racing Championship continues,” continued the letter.

“With an upcoming increase in tracks we will have a broader reaching championship across the country. This will increase awareness and support in more regions around Australia.

“We will continue to chase corporate partners for ANDRA Drag Racing. Whilst securing a replacement sponsor for the Sportsman Series it will have a knock on effect for other categories.

“We plan to have regular releases this year especially in regards to Group 1.

“We will continue to reduce costs to members. We saw the first of this last year with reduced insurance costs for ALL tracks and license reductions for S/ST and Junior’s.

“The TV show has improving ratings and is getting more affordable with further reductions possible.

“At the end of the day ANDRA exists for its members, the members are the sport.

“This is not to say we ignore tracks, sponsors and spectators, as they are also very important to the sport and to ANDRA.

“But the threats from the tracks are absolutely counterproductive to the sport as a whole. ANDRA will survive as we have survived in the past.

“ANDRA is Australian for Drag Racing and we all make up a part of that.

“No individual or group is more important than the sport itself and the sooner we acknowledge this and all move forward together the better off the sport will be.

“ANDRA has invited the three tracks mediation however this has been rejected.”