Australian James Davison has raced to a win and a pair of second places behind the wheel of his Nissan GT-R NISMO GT3 in the Pirelli World Challenge round at Elkhart Lake.

The result was Davison’s second GT win of the series as he maintained cracking form in round 13 at the Road America course in Wisconsin.

In the first heat Davison finished 6.3s behind winner Tomas Enge who soon took over the lead in his Lamborghini Gallardo GT3. 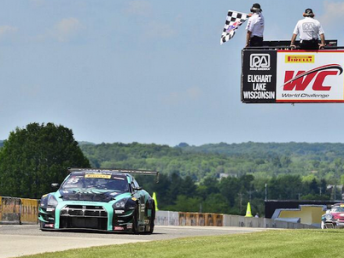 Davison was awarded the Cadillac Move of the Race award after passing Mike Skeen, who finished third in the Audi R8 LMS Ultra, late in the race.

In the second race Davison had to play second fiddle to New York driver Chris Dyson who scored a 3.8s win in his Bentley Continental GT3.

Davison produced some of the best form of his career by climbing onto the top step of the podium with a faultless drive in the final leg of the three-race format.

The lead GT pack of five racers were only separated by 3s on lap 10 when Davison snuck inside Enge and made the pass for the lead in Turn 6.

“We have a huge range of manufacturers from Europe and the drivers are what take it to another level,” Davison said.

“Having factory McLaren drivers like (Kevin) Estre and ex-Formula 1 guys like Enge and (Olivier) Beretta, we certainly have our work cut out for us as drivers and teams.

“There are many GT championships in the world but America is the biggest market for the majority of the manufacturers for their road car sales.

“And being able to represent these manufacturers is a pretty cool honour for all of us. ”

A win in the opening 30-lap race ensured Charles Leclerc continued to head up the standings in the title hunt at the Norisring round. Leclerc (Dallara-Volkswagen) took the win by less than a second from Antonio Giovinazzi while Maximilian Günther (Dallara-Mercedes) took the middle heat from Alexander Albon.

Giovinazzi struck back in the final 38-lap race, beating George Russell by more than a second with Albon third while Leclerc, enjoying his first Norisring encounter, was fourth.

“I’m very happy about my fourth win of the season, and I think we had the speed to win race 2 as well, but I had to settle for third after some nice racing manoeuvres,” Leclerc said.

Leclerc heads the standings on 269.5 from Giovinazzi (227) while Felix Rosenqvist is third on 203.

The F3 championship moves to Zandvoort for the next of the triple-race format rounds from July 11-12. Sebastien Loeb spearheaded a sweep by the Citroen team

Citroen has dominated the latest round of the championship at Paul Ricard with wins to Sebastien Loeb and Jose Maria Lopez.

Loeb led a Citroen sweep of the top four places in the opening race from Yvan Muller, Lopez and Ma Qing Hua.

Lopez now assumes a 39-point advantage over Muller in the standings while Loeb is 74 points adrift.

Citroen team principal Yves Matton said: “After picking up the top four places in qualifying, our drivers finished the job by repeating the feat in Race 1.

“It’s very satisfying to see Seb win in front of his home crowd, particularly as this was his first win in a race that, more than anything, rewards pure performance.”

The WTCC moves to the next round at Portugal from July 12. 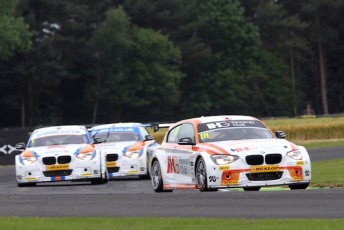 The West Surrey Racing BMW squad has climbed to a three-win sweep of the latest round at Croft.

Priaulx said: “It’s been amazing – the first win since coming back was just great, then to get second place at the last moment in race three topped it all off.

“I got through the whole day without any scratches too, which is a pretty big achievement.”

In the middle race Sam Tordoff led from the outset to score a 2.3s win from Jason Plato’s Volkswagen.

Plato is second while Matt Neal is 22 points off the lead in third.

The BTCC now takes a six-week summer break ahead of the next round at Snetterton from August 8-9. 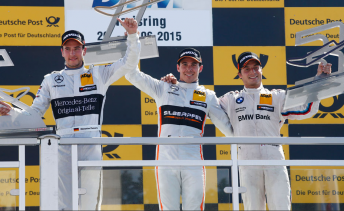 DTM
Mercedes dominated the Norisring round of the championship with Robert Wickens taking the 74-lap second heat.

Wickens beat Christian Vietoris while Bruno Spengler realised the first podium of the season for BMW.

Pascal Wehrlein was fifth after winning the opening race from Wickens with Gary Paffett completing the podium.

Championship leader Jamie Green’s puncture saw him tumble out of contention, finishing one lap down in 19th position.

Green holds a nine point lead on 81 ahead of Mattias Ekstrom in the standings.

The DTM moves to Zandvoort for the next round from July 11-12.