Vitantonio Liuzzi behind the wheel of the FFF Racing McLaren

McLaren and Bentley shared the spoils in the latest round of the GT Asia Series at Japan’s Okayama circuit.

The FFF Racing Team McLaren of former Formula 1 driver Tonio Liuzzi and Hiroshi Hamaguchi clinched victory in Race 1 as the duo benefitted from their rivals being hit by a penalty in the second half of the race.

However, drama struck before the race had even begun when the #1 Clearwater Racing Ferrari piloted by Italian GT ace Gianmaria Bruni caught fire on the way to the grid ruling him out of the contest.

Liuzzi, who started from fourth, followed the two Absolute Bentley’s of Andy Soucek and Duncan Tappy before he managed to split the pair after the pit stops.

With Hamaguchi at the wheel, the McLaren inherited the lead when the Soucek/Jeffrey Lee Bentley was handed a penalty for speeding in the pit lane.

“We’re all really proud of the job we’ve done. Obviously we were pushing very hard because we felt that Okayama better suited the characteristics of our car,” said Liuzzi.

“We were still struggling a little on the long straights, but through the infield it was very quick. I had a good start and tried to keep out of trouble into the first corner.

“I was able to pass one of the Bentleys into turn one, and had quite good pace, so just tried to conserve the car to hand over to Hiroshi.” 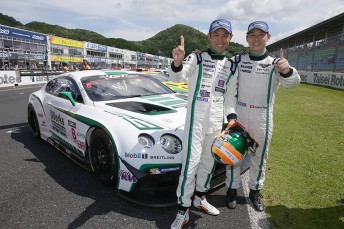 The second race belonged to the Bentley pair of Adderly Fong and Keita Sawa who controlled the 45 minute encounter from start to finish.

Fong drove the opening stint before handing over to Sawa for the final segment which saw the Absolute Racing driver come under severe pressure from Brit Richard Lyons in the Craft Bamboo Aston Martin.

In the end, Sawa hung on to take the win by 0.4s from the hard charging Lyons with the sister Craft Bamboo entry of O’Young and Venter in third.

Richard Wee and Matt Griffin finished fourth in the remaining Clearwater Racing Ferrari 458 just ahead of the Rizzo/Liu BBT Ferrari.

“By the last lap I wasn’t sure I could win, because Richard was coming very fast and I was pushing hard,” said Sawa.

“We also didn’t change tyres during the stop, so my tyres weren’t at their peak, but we were able to do it.”

The championship now enjoys a three week break ahead of the fifth and sixth rounds of the season at Fuji International Speedway, Japan on July 17-19. The B Max NDDP driver managed to hold off polesitter Kenta Yamahsita to take the chequered flag by 0.8s with B Max team-mate Lucas Ordonez in third.

New Zealander Nick Cassidy, who started from third, finished in fifth behind Nirei Fukuzumi after he was unable to recover from being pushed wide at the start of Race 1.

Takaboshi repeated the feat in Race 2 with the Japanese driver finishing 0.4s ahead of Yamashita, with Ordonez completing the podium in third.

Cassidy was forced to settle for fourth spot having lost out to Ordonez earlier in the race.

The Japanese Formula 3 Championship will head to Fuji Motor Speedway on July 18-19.