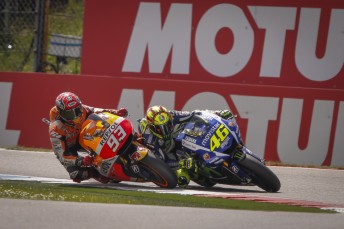 Valentino Rossi came through a thrilling duel with Marc Marquez to win the MotoGP Dutch Grand Prix at Assen.

The Yamaha rider was put under intense pressure from Marquez throughout but the nine-time world champion managed to hang on to claim victory despite a final lap lunge from his rival.

While Rossi and Marquez dominated the race at the front, Yamaha’s Jorge Lorenzo endured a lonely ride to claim the final place on the podium.

Rossi led the majority of the race from pole position while Marquez immediately slotted into second spot and began to apply pressure on the Italian.

The duo quickly moved away from a fast starting Lorenzo, who jumped from eighth on the grid to third on the opening lap.

All eyes were focussed on the battle for the lead which took an interesting twist when Marquez leapt passed Rossi at Turn 1 to grab the lead with seven laps remaining.

However, Rossi fought back to regain the position four laps later to set up a fascinating climax.

The Yamaha man punched in two fast laps to gap Marquez but the Spaniard responded by trying to pass Rossi with an audacious move at the final corner.

The pair made light contact which forced Rossi to cut the final corner, but it failed to prevent him from taking the chequered flag from Marquez, with Lorenzo a distant third.

Rossi’s victory has seen him open up a 10 point lead in the championship standings.

LCR Honda’s Cal Crutchlow was sixth just a tenth behind Espargaro, but crucially ahead of his former team-mate Bradley Smith.

It proved to a disappointing race for Australia’s Jack Miller as he was involved in a heavy opening lap crash with Hector Barbera.

Miller escaped the crash on foot while Barbera was stretchered to the circuit’s medical centre.