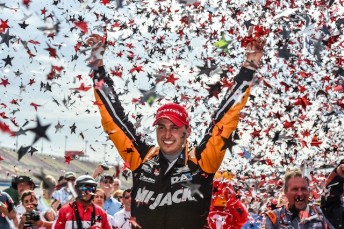 Rahal took the chequered flag in a messy finish under caution to beat Tony Kanaan and Marco Andretti.

It signalled the Rahal/Letterman/Lanigan Racing driver’s first victory since St Petersburg in 2008.

The race saw a return to some dicey pack racing before several accidents in the closing stages of the 250-lap affair brought back memories of the 2011 Las Vegas accident which claimed the life of Dan Wheldon.

With 30 laps remaining the fourth caution period for debris was called as the leaders dived into the pits as Will Power won the race off pit road.

Then with nine laps remaining Takuma Sato and Power crashed as the AJ Foyt driver ricocheted off Dixon on the inside and went into the path of the Australian on the outside on the front straight.

After exiting his car a furious Power shoved an official who was trying to usher him toward the medical vehicle as his love/hate relationship with the Fontana venue continued.

Power personally apologised to the official and would later tweet his remorse over the heat-of-the-moment action saying: “I want to apologise to the safety guy. I shouldn’t have pushed him and I’m sorry for that. I was extremely upset, but I know that’s no excuse.”

“What are we doing?” a concerned Power asked.

“We went in there and told them (IndyCar after practice) this is pack racing.

“That’s the Vegas situation right there and I’m just so happy no-one was hurt.

“You have to take massive risks to gain track position.

Officials then red flagged the race to ensure a green finish as Rahal led the restart from Ryan Briscoe with three laps remaining.

With one lap remaining Ryan Hunter-Reay was forced into Briscoe causing the Australian’s Schmidt-Peterson machine to flip in the air on the front straight.

Like the Sato and Power accident, both Briscoe and Hunter-Reay escaped injury during a race saw 83 lead changes, eclipsing the previous IndyCar record number of 73 that was achieved in 2001.

Earlier the first caution period was triggered on lap 136 when Helio Castroneves became the meat in the sandwich as Power on the highside and Briscoe on the inside simultaneously overtook the Brazilian.

Castroneves spun but avoided heavy contact with the wall as the car was returned to the garage for repairs with the three-time Indy 500 champion returning to the fight albeit 14 laps down.

After joining the restart following a 15-lap Safety Car period, Castroneves returned to the pits soon after and retired from the race.

Briscoe, who would serve a stop/go penalty for causing the accident, lost his right-rear wheel pod in the scrimmage as Power assumed the lead during the caution period.

On lap 159 CFH Racing team-mates Ed Carpenter and Josef Newgarden collided when the former under-steered to the outside and into the path of the Toronto race winner.

Big mover Rahal’s race was seemingly ruined during a messy pit stop where his refueller had gone back to re-engage his fuel hose as the car controller gave the all-clear for the car to exit the pit bay.

Rahal sped off and but debris from the end of the fuel hose caused a caution period to be shown.

Officials decided not to issue an immediate penalty for the incident, deciding to review it post race, which bemused several team owners including Sam Schmidt.

Montoya heads the standings going into the Milwaukee race on July 21 on 407 points, 46 clear of Power and 49 ahead of Dixon.

See below video of the Ryan Briscoe/Ryan Hunter-Reay accident