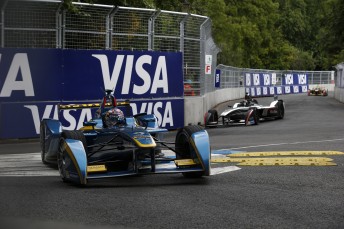 Sebastien Buemi gave his FIA Formula E Championship title hopes a significant boost with victory in the first of two races at the London title decider.

The e.dams driver produced a faultless drive from pole position at the altered Battersea Park circuit to score his third win of the season to move within five points of championship leader Nelson Piquet Jr.

After starting under the Safety Car due to the Turn 1 track modification, Buemi quickly opened up a three second lead over Dragon Racing’s D’Ambrosio which he maintained after the mandatory pit stops.

His lead was erased when the Safety Car was deployed when Daniel Abt hit the wall at the final corner.

However, Buemi made no mistakes at the restart as he went on to take the chequered flag by 0.9s from D’Ambrosio.

Vergne faced immense pressure from title contender Lucas di Grassi in the closing stages but the Frenchman managed to hold on to take third.

It is understood race organisers will attempt to resurface the bump at Turn 1 which could see the temporary barrier removed for Sunday’s title decider.