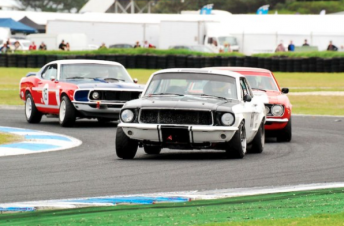 The 1968 Ford Mustang once raced by Fraser Ross

A vintage Ford Mustang once raced by touring car legend Jim Richards is up for sale via Speedcafe.com Classifieds.

The 1968 Ford Mustang was campaigned by the four-time Australian Touring Car champion in selected rounds of the 2008 and 2009 Touring Car Masters.

Richards scored two second place finishes at the 2008 L&H 500 at Phillip Island, with the New Zealander finishing behind Brad Tilley and John Bowe in two of the three races.

The seven-time Bathurst winner guided the car to third in the 2009 Clipsal 500 and 2008 Oran Park Touring Car Masters rounds.

The listed 1968 Mustang has since been raced by current owner and Porsche Carrera Cup regular Fraser Ross in Group Nc meetings.

The car is fully race prepped featuring an array of spares for the prospective buyer.

For the chance to purchase this Ex Jim Richards Ford Mustang, simply click here and register for free.