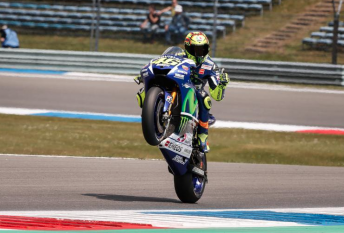 The Yamaha rider had been languishing in the lower reaches of the top 10 for much of the session before posting an impressive 1:32.627s effort to snatch pole position in the dying moments.

Suzuki’s Aleix Espargaro, who had moved to the top of the times during his second run, trailed the nine-time world champion by 0.2s.

Both Rossi and Espargaro were hit with a €2,000 fine and had their first timed laps wiped from the session, after Race Direction deemed the pair gained an unfair advantage by leaving the pit lane whilst the red light and red flag was displayed.

Honda’s Marc Marquez completed the front row in third with the reigning world champion looking more at home aboard the 2014 chassis.

It proved to be a strong session for Honda with Dani Pedrosa heading up row two in fourth, ahead of Tech 3 Yamaha’s Pol Espargaro and Ducati’s Andrea Iannone.

LCR Honda’s Cal Crutchlow will start Saturday’s race from seventh alongside title contender Jorge Lorenzo, who ended up 0.4s adrift of his team-mate Rossi, having struggled throughout the session.

The sister Suzuki of Maverick Vinales was ninth with Ducati’s Andrea Dovzioso rounding out the top 10.

Australia’s Jack Miller will start the Dutch Grand Prix from 20th position on the grid for LCR Honda.