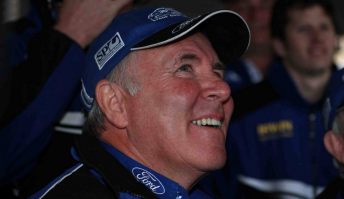 Ross Stone during his time as Stone Brothers Racing co-owner

The Gold Coast-based Kiwi was back in the V8 Supercars paddock last weekend at Hidden Valley for the first time since leaving Erebus Motorsport at the end of 2014.

The appearance in Darwin follows a recent purchase of a factory in Ormeau, Queensland, that Stone is refurbishing into a race team workshop.

Stressing last year that he was taking a sabbatical, rather than retiring from the sport, Stone says he is now preparing to start a race team with his immediate family.

“I’m kind of doing it back to front, but we’re working on getting the factory in shape and then figuring out what we’re going to do,” Stone told Speedcafe.com.

Stone says he is still weighing up the viability of a number of categories, but has strongly downplayed any suggestion that he could start his own V8 Supercars team.

“It’s very hard to get into V8 Supercars and it’s a massive commitment funding wise, people wise,” he said.

“It’s just such a big commitment for where I am in my stage of life.

“We’ve looked at a few options with DVS (Dunlop Series), but for us really I can’t get that to balance (financially).

“We are keen on Utes if things category-wise get sorted, or GTs, which I do think with the longer formats and two New Zealand races looks pretty good.

“But it’s about making the numbers stack up.

“First and foremost whatever we do, I really want to enjoy it,” he added.

“If you get involved in any racing it generally consumes you, so you’ve got to make sure you’re enjoying what you’re doing.”

The two Stone brothers worked side-by-side for the majority of their careers before selling SBR but, according to Ross, there will be no professional reuniting of the partnership.

“I really enjoyed hanging out with Jimmy and Matt across the weekend with their Utes and TCM car, seeing how they do things,” he said.

“But they’re getting along well on their own and I feel the time is right to do some racing with (wife) Di and our family, with a good crew making up a strong team.”