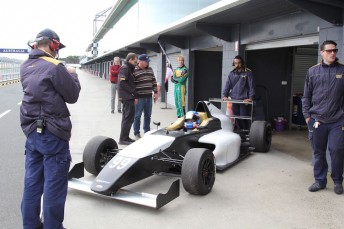 AGI Sport has confirmed it will field five cars at the inaugural round of the CAMS Jayco Australian Formula 4 Championship on the streets of Townsville.

The New South Wales outfit has announced that Queensland pair Will Brown and Jack Sipp will join the squad at the Castrol Edge Townsville 400 (July 10-12) on a race by race deal alongside Western Australian karting champion Jordan Love.

The trio will join the already confirmed Tom Grech and Jimmy Vernon, who agreed to full-time deals with the squad earlier this year.

The teenager also finished second in his maiden race in the Australian Formula Ford Series this season.

Love joins the team with overseas single seaters experience having competed in the Asia Cup Super 6 Championship this year.

“We have a great mix of drivers on-board including some of this countries most promising young Karters through to experienced open wheel competitors, which I think is testament to the appeal and opportunity provided by this new series,” said AGI Sport Team Principal Adam Gotch.

“Interest in the new championship has been ramping up considerably in the weeks leading up to the inaugural round and it’s great to see the buzz about the Championship.”

CAMS is expected to confirm a 12 car grid when the official entry list is released on Monday.