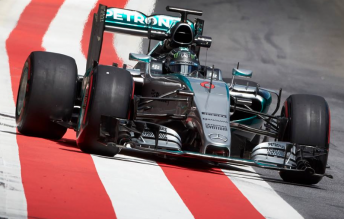 Nico Rosberg on his way to topping the times in Austria

The German managed to log 117 laps with his session best 1:09.113s arriving early in the afternoon on super soft tyres.

There was no sign of the torrential rain which curtailed much of the running on Tuesday, allowing teams to clock up plenty of mileage.

The Mexican’s time eclipsed that of Valtteri Bottas, who had topped the time sheets for much of the day on the soft rubber.

The Williams driver switched to the super soft compound for the afternoon where he improved his time to finish 0.9s adrift of Rosberg.

Reigning DTM champion Marco Wittmann impressed on his F1 debut in fourth as he racked up the most mileage with 158 laps in the books for Toro Rosso.

Fresh from his run with Mercedes, Pascal Wehrlein was fifth fastest as he joined the Force India squad to help the development of its revised B spec car.

Wehrlein was a tenth quicker than the Lotus driven by test driver and GP2 champion Jolyon Palmer.

Red Bull Racing’s Daniel Ricciardo was eighth although the Australian did cause the only red flag when his RB11 came to halt with a brake problem in the final hour of the hit-out.

“We did a lot of laps today and that included a pretty big break over lunch to make some car changes, so to get in more than 100 laps was very good,” said Ricciardo.

”We learned a few things and we tested a lot of stuff. We had a big aero rake on the car this morning that looked like something out of ‘The Terminator’ but it’s all good information for the aero guys and will help going forward.

“We had a small problem at the end with the brakes but it wasn’t a major issue and we were able to get out again for one last run.

“I’m looking forward to Silverstone now – there are a few more corners and less straights in Silverstone (than here in Austria), so I think it should suit our car a bit better.

“We have some updates coming to Silverstone as well, so I hope we can take the fight to our immediate rivals.”

The Spaniard was able to evaluate a selection of the team’s latest upgrades including its new shorter nose, which only arrived at the track just in time for the session.