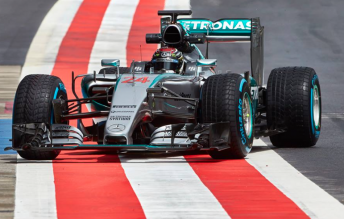 Heavy rain restricted track time to just the afternoon session, where Wehrlein clocked a 1:11.005s set on super soft tyres to finish atop the time sheets.

The inclement weather saw the session extended by two hours due to torrential rain curtailing any meaningful running in the morning.

Force India chose the test its B spec car which proved to be quick in the hands of reigning FIA European Formula 3 champion Esteban Ocon, who emerged 0.187s slower than the Mercedes on super soft rubber.

Max Verstappen ended the day third fastest for Toro Rosso having sat at the top of the charts for much of the running when the track was wet.

The Dutchman recorded the most mileage with 97 laps in the books, clocking a best time just 0.323s adrift of Wehrlein.

The afternoon running was halted when Ferrari’s Antonio Fuoco clattered the barriers at Turn 1, which brought out the red flags.

Fuoco had already recorded a time good enough for fourth before the crash ended his day prematurely.

Romain Grosjean was fifth quickest for Lotus just two tenths of a second ahead of GP2 star Pierre Gasly, who racked up 80 laps for Red Bull Racing.

McLaren managed to log a healthy 76 laps as they continued to develop its struggling package, with Stoffel Vandoorne ending the day in eighth.

Teams will return to the track for the final day of the test today.