The Tasman Motorsport Holden that Greg Murphy and Mark Skaife shared in the 2009 Bathurst 1000 will be amongst the action at this weekend’s Goodwood Festival of Speed.

Dubbed TAS001, the car was sold to British club racer Alex Sidwell late last year and has been returned to its Bathurst livery for the esteemed festival.

Sidwell has been campaigning an ex-PWR Holden V8 Supercar for some time in local saloon car competition, holding off on the debut of the ex-Tasman car until Goodwood.

The VE has completed shakedown runs at the Bruntingthorpe Proving Ground in Leicestershire and Kent’s Brands Hatch circuit ahead of the weekend.

The Sprint Gas-liveried entry famously finished fourth at the 2009 Bathurst 1000 in the hands of Murphy and Skaife after an ill-timed Safety Car cruelled their chances of victory in the closing stages.

It was raced by Geoff Emery in the Dunlop Series for the following three seasons before being retired from V8 Supercars duties.

It will be the second V8 Supercar to run up the Goodwood hill in as many years, with fellow local Andy Robinson driving an ex-PWR Ford Falcon AU – presented in 00 Motorsport colours – last year. 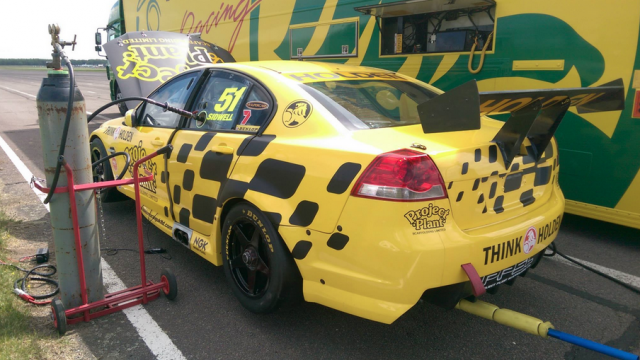 The car during its first run on English soil at a Leicestershire airfield last month. pic: Holden Racing (UK) via Facebook

VIDEO: Onboard the Tasman Holden at Brands Hatch