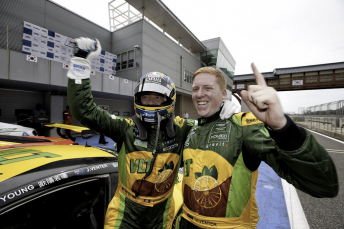 Young Sydney racer Jonathan Venter is looking to broaden his career with the British GT Championship on his radar.

Currently placed with Darryl O’Young in the Hong Kong-based arm of the Craft-Bamboo organisation, Venter wants to supplement his GT Asia competition with possible starts in the British GT Series.

Believing exposure to the European market will add more credence to his furnishing career, Venter is one of 10 drivers inducted into the UK-based Aston Martin Academy for 2015.

“I thought about doing one or two rounds of British GT this year to see how the competition is there,” Venter told Speedcafe.com

“There is nothing concrete with British GT but being part of the academy it would be good for me to perform in the UK where it is based.

“I haven’t had much exposure to the European market before.

“In terms of categories, I’m really keen on GT3 and wouldn’t mind sticking with it for the rest of my career.”

Venter made a successful start for Craft-Bamboo, winning the Sunday race of the opening round of the GT Asia series at Yeongam in South Korea.

He and O’Young are among the favourites to continue the strong form at the next round in Okayama, Japan, this weekend.

“Craft is a really good team and have so many options within the team and all the categories they are involved with.

“And the connection into Aston Martin itself is great.

“They are very professional and it’s a great atmosphere within the team as well. I’ve learnt so much.”